In partnership with Agricology and open to both Oxford Farming Conference and Oxford Real Farming Conference delegates, this is a farm visit to Daylesford, to explore the role of resorative leys in different agricultural systems. The tour around Daylesford beef, sheep, dairy, forage conservation and arable production system will focus on sharing experiences, exploring practical questions around the establishment, species and breed selection, the benefits of soil health, weed control, yields and challenges to overcome.

A coach will collect participants from Oxford at 8.30am and return to the OFC at 2.30pm, in time for the start of the Fringe Events.

The Small Robot Company 3.15pm to 4.00pm – You are steward of your land for the next generation. You can stop worrying. Find out why you need to work with us. Be part of the next farming revolution! Room 11

Map of Agriculture 4.30pm to 5.15pm – We provide agricultural insight and knowledge through pioneering analytics and modelling. Room 9

The rise of technology in agriculture presents many opportunities for food production in the UK. BBSRC is investing in exciting advanced agricultural research that explores these opportunities and delivers them to UK farmers. Meet the researchers working to bring technological innovations out of the lab and onto the farm, tackling problems from food waste to herbicide-resistant blackgrass.

There will be two sessions, the first starting at 3.15pm and the second at 4.30pm. Book onto the event or come and browse during the coffee break. Click on the picture below to view the topics and speakers. 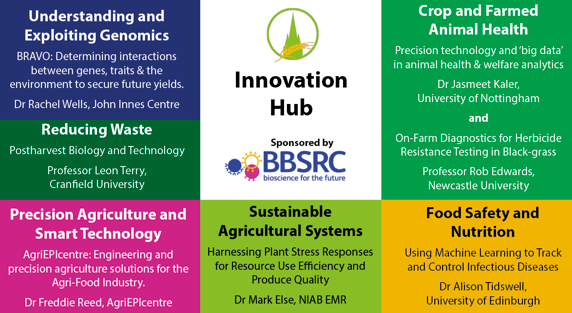 An Innovative Farmers Event open to both OFC and Oxford Real Farming Conference delegates, this Fringe Event will showcase some great beer makers, talking about how they brew their ales. The event follows the successful Grate Cheese Debate held at the 2017 conference which went down very well with the delegates from both events.

Held at the beautiful Keble College which was founded in 1870, in memory of John Keble (1792-1866), a founding member of the so-called ‘Tractarian’ movement which sought to recover the Catholic heritage of the Church of England. Funding for the new College was sought from Tractarian sympathisers, including the benefactor of the Chapel, William Gibbs, whose family’s fortune was based on Peruvian bird droppings, a valuable fertiliser. Keble College opened its doors to just thirty students in 1870, and the Chapel was opened on St Mark’s Day 1876.  It is now one of the largest Oxford colleges, with 425 undergraduate and 246 graduate students.

A line up of politicians, including Rt Hon Michael Gove MP, Secretary of State for Defra and Paolo de Castro MEP, vice-chairman to the European Parliament’s Committee on Agriculture and Rural Development and former Italian Minister for Agriculture and Ted McKinney, Under Secretary for Trade and Foreign Agricultural Affairs to United States Department of Agriculture.

This session will explore digital change and opportunities for farming - the technologies, machine-learning and clever disruption.

Amy Barthrope, Head of Business of We Farm, a free peer-to-peer service that enables farmers to share information via SMS, without the internet and without having to leave their farm. Farmers can ask questions on farming and receive crowd-sourced answers from other farmers around the world in minutes.

Chris Sheldrick, CEO of What3Words will also be speaking. Brought up on a farm, Chris used to manage live events all over the world and was constantly frustrated by people trying to find places. So over a cup of tea with a mathematician friend, he shared his frustration with GPS coordinates and together they conceived a way of naming everywhere in the world that would be incredibly easy for people to use.

Professor Dieter Helm  is Professor of Economic Policy at Oxford University and a specialist in energy policy, regulation and the environment.  As Chair of the independent Natural Capital Committee, Professor Helm holds some controversial views about how British agricultural policy should look after Brexit. Expect food for thought ahead of lunch!

Farmers from very different countries and backgrounds will talk you through their inspiring personal and business journeys. This session will leave you humbled and energised with a sense of "can-do". The speakers in this session are: 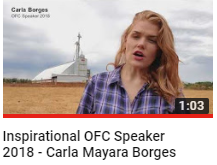 Professor Chris Elliott from Queens University, Belfast, an eloquent and brilliant speaker, will inform, challenge and inspire us about global food supply chains, food fraud and food safety. Watch the trailer below. 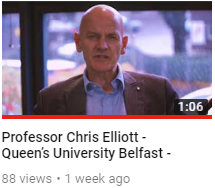 Sponsored by Savills and Thrings

Topic: "This House believes that by 2100 meat eating will be a thing of the past"

Sponsored by Savills and Thrings

This wonderful dinner is in the Christ Church Hall.

Christ Church was founded nearly five hundred years ago, part of Renaissance movement to improve education and train young men for an active life in the church or the state.

Christ Church is famous for its connection with two fictional figures: Alice in Wonderland, the creation of the 19th-century mathematics tutor Charles Lutwidge Dodgson (Lewis Carroll), and Harry Potter (the film version of Hogwarts was partly based on Christ Church Hall). But there have been many real-life alumni of historical importance: among them John Locke the philosopher; William Penn, who founded Pennsylvania; W.E.Gladstone, four times Prime Minister and the poet W.H.Auden.

The Oxford Farming Conference's first ever Comedy Night which will be held in the Old Fire Station. Book early, numbers will be limited. Watch the trailer below. 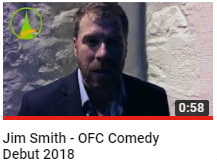 The first session (above) has now sold-out but due to demand we are pleased to add this second session to the programme. Held in the Old Fire Station from 23:30 to 00:30, tickets are limited - click here to book.

Sponsored by The Prince's Countryside Fund

A morning of lectures in the Sheldonian

Embracing change ourselves, the Oxford Farming Conference will take over the majestic Sheldonian Theatre for the Friday morning lectures.

The Sheldonian is an exquisite Grade I listed building situated in Oxford’s city centre, is the official ceremonial hall of the University of Oxford

James Wong is a Kew-trained botanist, science writer and broadcaster. His work for the BBC includes the award-winning 'Grow Your Own Drugs' and the 'The Secrets of Your Food', as well as Radio 4's 'Gardeners' Question Time'. He is passionate about communicating plant science to new audiences and in 2015, The Sunday Times listed him as one of the Top 20 most influential people in horticulture.

This debate on 'The Birds & The Bees' covering policy and what the practicalities of greening and biodiversity might be over the coming years. The panel will be:

Sponsored by The Frank Parkinson Trust

Steve Murrells will be speaking about his role as CEO of the Co-op Group. As a senior executive at the Co-op Steve has been a key part of the team which has rebuilt the Co-op, relaunched its membership proposition and returned its iconic blue clover-leaf logo to the high street. As CEO of Co-op Food, Steve was responsible for the Co-op’s £7bn-turnover food retail arm with its 2,800 strong network of stores and logistics operations which span the whole of the UK. He introduced the Co-op’s new retail strategy which focuses on convenience and turned around the business to grow its market share.

Mark Lynas first spoke at the OFC in 2013 and has been the most viewed speaker ever in the conference’s online video archive. Mark is the author of three major popular science environmental books: High Tide (2004), Six Degrees (2008) and The God Species (2011), as well as the Kindle Single ebook Nuclear 2.0 (2012). Mark was climate change advisor to the President of the Maldives, he has contributed extensively to global media, writing for the Guardian, New York Times, Washington Post and numerous others. He is a visiting fellow at the Alliance for Science, Cornell University, which is supported by the Bill & Melinda Gates Foundation.

A British food festival served Street Food style, will be held in the North and South Schools at The Examination Schools.

The 2022 Oxford Farming Conference, Routes to Resilience, will be co-chaired by Barbara Bray MBE and Sarah Mukherjee MBE and will be held from 5 to 7 January 2022. The event will embrace a hybrid model with the opportunity for you to attend the live conference in Oxford, enjoying the stunning venues and social activities, or from the comfort of your home via our digital package.